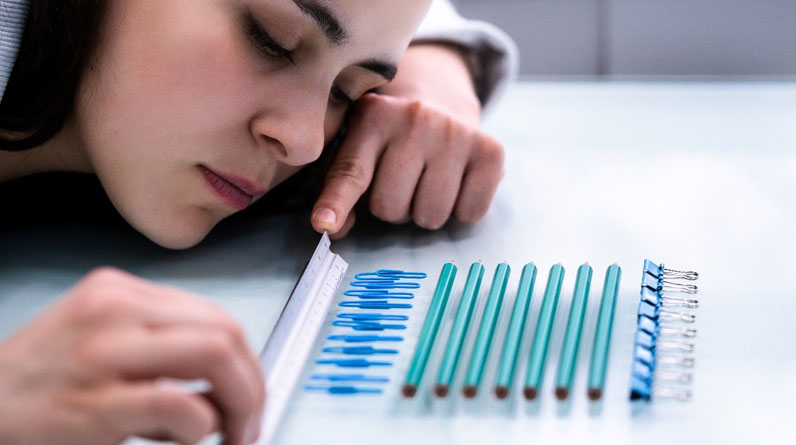 More commonly referred to as OCD, obsessive-compulsive disorder is a mental health condition involving obsessive and compulsive thoughts and behaviors. It is prevalent in nearly 3% of the American population.

OCD is not to be confused with an obsessive-compulsive personality disorder. While both have overlapping characteristics, the former encompasses the intrusiveness of thoughts and behaviors while the latter impacts personality traits.

OCD is often misunderstood, with many holding the perspective that such thoughts and behaviors are easily recognizable and thus changeable. On the contrary, while such obsessions and compulsions may certainly be recognizable by the individual with the condition, they are not a matter of choice but rather an incessant and uncontrollable need.

Symptoms of OCD aren’t fleeting, nor are they simply a casual annoyance. Rather, they’re long-lasting and persistent, only getting more intense with time. This differentiates those who think they have “OCD” because they feel a “need” to fold a t-shirt correctly and those who suffer tremendously from the disorder, which constantly controls their every action.

The symptoms involved with OCD are primarily those of obsessions or compulsions.

Obsessions are often the beginnings of OCD, starting as an intrusive thought and later developing into a compulsion to act on it. While the range of topics, situations, and circumstances vary significantly for those with obsessive thoughts, the following are some of the most common obsessive thoughts:

When such intrusive thoughts enter the brain of those with OCD, it immediately becomes an obsession, and they cannot ultimately ignore, suppress, or find the rationale to deal with it.

Failing to seek professional help to manage and treat these intrusive thoughts may result in further developments of obsession to the point of debilitation and an inability to function in daily life.

Compulsions result secondarily from an obsessive thought as a way to try to relieve the anxiety and stress caused by that obsessive thought. Compulsory actions usually persist as uncontrollably repetitive actions.

Similar to obsessions, compulsions can manifest in many different ways, situations, and circumstances. The following are some common examples:

When obsessive thoughts become compulsive acts, the ability of the individual to manage the symptoms becomes extremely difficult. At this point, failing to seek help will result in reaching a point of debilitation and an inability to function in daily life.

The risk factors associated with the diagnosis of OCD can be external or internal and can be related to family history. OCD is also correlated with levels of serotonin in the brain, which impacts mood and other regulatory functions. The following are some of the most notable risk factors.

Increased stress over time has been shown to increase the risk of developing OCD, and those that already have OCD can have worsening symptoms with additional stress.

Individuals who have suffered personal trauma such as child abuse or neglect are much more likely to develop OCD.

Certain personality traits are also highly correlated with OCD, such as perfectionism, worry, overthinking, and fear. If these traits are present, OCD can often result.

People who have a history of brain injury, chemical imbalance, or genetic mutation have a high correlation with the development of OCD.

If the diagnosis of OCD is made, it’s best to consult with a mental health professional to decide on the best course of treatment.

In most cases, OCD requires a multifaceted approach in order to successfully manage the condition, and this usually includes medication and therapy. Some people have benefited from combined medical and cognitive behavioral therapy, and some have done well with either singular medication treatment or singular behavioral therapy.

Other potential treatments include deep brain stimulation, which is the process of placing electrodes on specific locations in the brain. This treatment is usually reserved for cases in which all other treatments, including medication and therapy, have been unsuccessful. The procedure is performed by a Neurosurgeon and has the associated risks of surgery; however, the results seen by this procedure have been very promising.

Treatment of OCD most often involves medication, and some examples of the most effective medications include Prozac, Zoloft, Celexa, Clomipramine, and Effexor. These medications work by affecting serotonin levels, and they have been very effective in reducing the symptoms of OCD.

OCD can be a debilitating condition, yet it can be treated and managed with professional interventions by a mental health professional. In addition, the condition should be evaluated and treated early to achieve the best results.